The Daily Beast sits down with former NJ Governor Jim "I am a gay American" McGreevey, who muses on New Jersey politics — Chris Christie's presidential ambitions, and Cory Booker's senate ambitions. He also reveals that after an initial rejection from the Episcopal Diocese of Newark in his bid for the priesthood back in April, he has given those ambitions up: 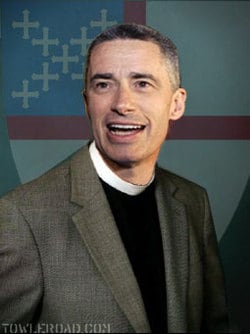 "For me, being gay—and the [Catholic] Church had taught—was 'abominable sin.' It was worthy of hell," McGreevey says, explaining why he fled the religion of his Irish-Catholic upbringing. "That's also what's sad about me and my friends who are Catholic, whether they're gay or straight, or straight and divorced. It's just that religion and faith ought to be a place of support, of nurturing, of transcendence, as opposed to condemnation … In many ways, religion can become paternalistic, regimental, rigid, patriarchal, and be stifling as opposed to ennobling." As for his ambition to be a priest, "for now," McGreevey says, "I've put that up on the shelf."

And despite the hell he was dragged through in his divorce with ex-wife Dina, he wants to marry again:

McGreevey and O'Donnell would like the option of marriage, but "we don't have gay marriage in New Jersey," McGreevey says—because last February, his friend Chris Christie vetoed the bill that would have legalized same-sex marriage.

"I look forward to the day when marriage is accepted fully," McGreevey says. "There ought not be gradations of marriage; all persons ought to be treated equally. We passed domestic partnership when I was governor [and in the closet]. I was not publicly in favor of gay marriage then … But there can't be one status for straight America and a lesser status for gay America … My sense is that the public is far ahead of the political class, and especially for the next generation, it's a yawn. The shelf life of those who would oppose it is diminishing rapidly."