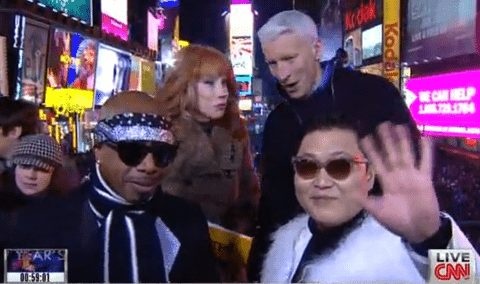 Goodness gracious, Kathy Griffin was in rare form when she joined pal Anderson Cooper for CNN's New Year's Eve countdown, particularly when tickled what she calls his "sack" and he what calls his "Christmas presents." She later attempted to distract the anchor by laying a lip smack down under. Maybe she was  confused about hemispheres and date lines?

Watch Cooper and potty-mouth Griffin try to be gracious hosts AFTER THE JUMP.

Previous Post: « Marriage Equality Being Introduced In Rhode Island Tomorrow
Next Post: Brian Sims Is Now Pennsylvania’s First Lawmaker Sworn In While Out »