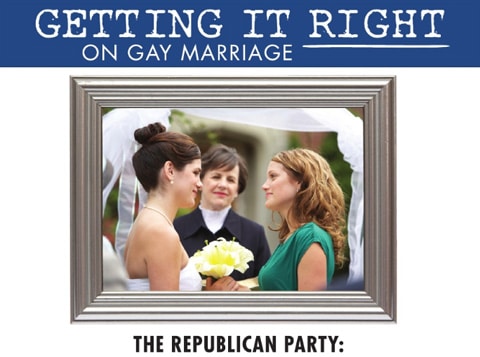 The Log Cabin Republicans took out a full-page ad in The Hill today urging the GOP to support same-sex marriage and oppose DOMA.

Reads the text of the ad:

Log Cabin Republicans applauds those Republican Members of Congress who have signed on to the Respect for Marriage Act and urges other Republicans to follow their lead. To be the party of limited government, individual liberty, and fiscal responsibility, the Republican Party must stop standing in the way of caring adults building a family and a life together. A full 53 percent of Americans now support the freedom to marry. It's time for Republicans to stop spending taxpayer money defending DOMA and start defending the right of ALL Americans to pursue happiness with the person they love.

"When Republicans focus on core issues of fiscal responsibility, low taxes, and jobs, we win elections. When Republicans do the right thing and support the freedom to marry for all Americans, we win new allies. Our new ad highlights this fact and urges the GOP to do what's right for America and for our future as a party."

Check out the full ad, AFTER THE JUMP…

Lcr the Hill by towleroad