The lawyer for Rohaiah Tuiasosopo, the man behind the alleged hoax targeting Notre Dame linebacker Manti Te'o, says it was Tuiasosopo's voice on the other end of phone calls and in voice mails with the football player, and that his client disguised his voice in order to develop "a relationship" with Te'o. 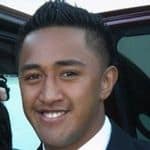 “This wasn’t a prank to make fun,” Grimes told The News. “It was establishing a communication with someone. … It was a person with a troubled existence trying to reach out and communicate and have a relationship.”

Grimes declined to answer when asked to elaborate on his client’s intentions or what type of relationship he wanted with the college football star: “I wouldn’t describe his issues at this time.”

Te'o has said he thought he was speaking to a woman.

The NYDN adds: "Tuiasosopo’s résumé includes vocal and dramatic training. He was president of his high school drama club, performs with a Christian band and auditioned last year for the TV talent show 'The Voice.'"

Voice mails from 'Lennay Kekua', the woman Tuiasosopo claims to have spoken as, were played in Katie Couric's interview today, during which Couric asked Te'o point-blank if he had lied to cover his sexual orientation.