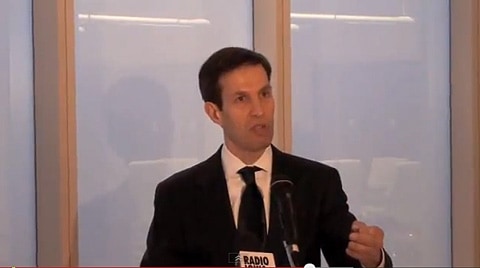 Mehlman said he has been well received by a couple of dozen senior-level Iowa Republicans. He was accompanied at some of the meetings by David Kochel, the top Iowa adviser for Mitt Romney’s presidential campaign.

“People have been nice to my face,” Mehlman, who is now a New York City businessman, said with a laugh. But he declined to reveal whom exactly he has met with since he arrived Sunday, noting “any issue in which people are evolving is always challenging for political leaders to deal with.”

Mehlman has teamed up with two Iowa marriage equality groups, Iowa Republicans for Freedom and One Iowa, to expand the number of right-of-center Iowans promoting civil marriage.

He told the paper: "Republicans have an opportunity to both stand up for values that are core to our philosophy — freedom, family values and the golden rule — and to do the right thing politically by allowing adults who love one another to have access to civil marriage."

Previous Post: « LGBTQ Youth, Allies, and Their Families from Modesto, California Speak Out with Signs: VIDEO
Next Post: Whitney Houston’s Mom Cissy Would Not Have Accepted Her as a Lesbian, She Tells Oprah: VIDEO »