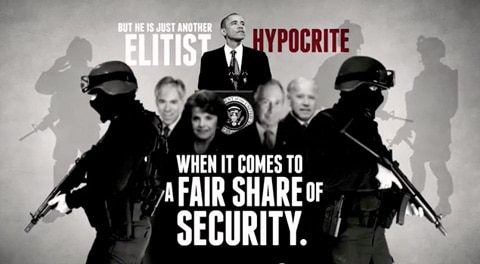 In a new ad that's being called political "pornography", the National Rifle Association pushes its campaign for armed guards in schools by accusing Obama of being an "elitist hypocrite" because his daughters have armed security and the rest of America's kids don't.

“Are the president’s kids more important than yours? Then why is he skeptical about putting armed security in our schools when his kids are protected by armed guards at their school? Mr. Obama demands the wealthy pay their fair share of taxes, but he’s just another elitist hypocrite when it comes to a fair share of security."

"Most Americans agree that a president's children should not be used as pawns in a political fight," Press Secretary Jay Carney said in a statement. "But to go so far as to make the safety of the president's children the subject of an attack ad is repugnant and cowardly."