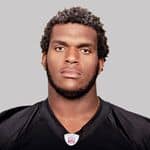 Kwame Harris, the former San Francisco 49er outed earlier this week after it was revealed he was being charged for assaulting a former boyfriend, has responded to Chris Culliver's anti-gay remarks.

Previous Post: « San Francisco 49er Chris Culliver on Anti-Gay Remarks: ‘I Apologize to Those I Have Hurt and Offended’
Next Post: Towleroad Talking Points: The Holocaust Isn’t Sexy »