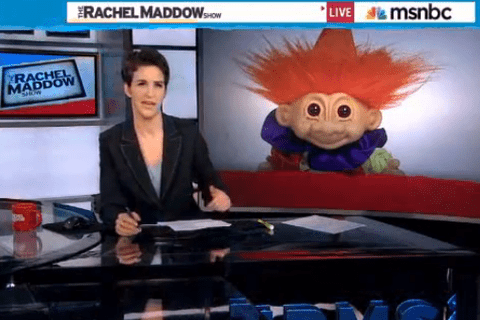 Rachel Maddow was all fired up for her take down of the NRA yesterday. The specific topic? The gun rights group’s advert attacking “elitist hypocrite” President Obama for using Secret Service to protect his daughters, a smear offensive both to common sense dictating such protections for the first family and to those of us who know the unwritten rule: president’s children are off limits.

To Maddow, NRA’s commercial is just another example of right-wing trolling. It is a schtick, she says before running through a brief history of trolling of “purposeful outrage” and how this schtick reveals a group or individual’s political impotence: if you have to go to these lengths, you’re truly desperate. And, what’s more, when one looks at how much money is spent on trolling, that shtick turns out to be a huge waste of money.

Watch Maddow – and, toward the end, fellow gay MSNBC staffer Steve Kornacki – say it like it is AFTER THE JUMP.