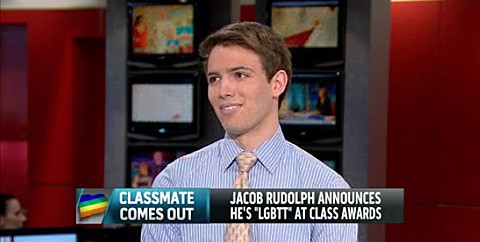 Most of you have by now seen the video we posted earlier this week of NJ high school senior Jacob Rudolph's coming out to his entire class. One of the most striking aspects of the clip was the fact that Rudolph said "I'm LGBTT" rather than "I'm gay".

MSNBC's Thomas Roberts interviewed Rudolph today about the video, and his identification:

"I intended to come out as an LGBT and not say bisexual or gay or straight because I feel like those are the labels of the past. Especially in modern times when people are really questioning who they like and what they like I think that saying 'I'm bisexual', it could change in the future, I could be sexclusively for one sex or another. So I think that putting it in a more general term like LGBT is extraordinarily appropriate even though I'm not a lesbian or a transgender."