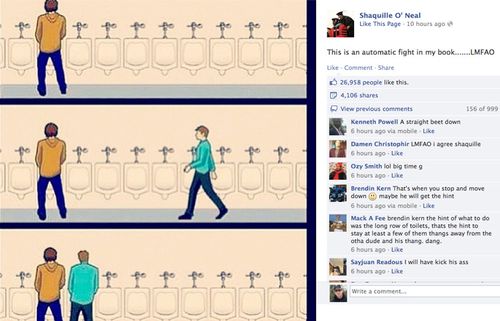 On his Facebook page yesterday, Shaquille O'Neal posted a cartoon about proper restroom etiquette featuring two men, one of whom is depicted striding in a swishy manner, relieving themselves at adjacent urinals, telling his followers what he would do should he encounter such a situation:

This is an automatic fight in my book…..LMFAO.

The posting has prompted more than 1,015 comments, a majority of them homophobic. Though he may have not intended it, the post, which points out a common men's room faux pas avoided by straight and gay men alike, has encouraged and produced hateful dialogue against the latter.