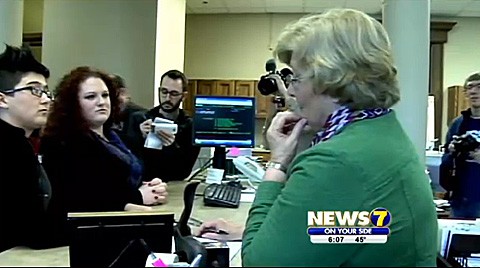 Five lesbian couples applied for and were denied marriage licenses in Hattiesburg, Mississippi yesterday as part of a demonstration by the Campaign for Southern Equality's "We Do" campaign.

All the couples applied for a marriage license, and were immediately denied. Forrest County Circuit Clerk Lou Ellen Adams explained the rejection.

"As I told the others, you know, this takes an act of the legislature to change this. My oath of office, as circuit clerk , I have to take an oath that I have to up hold the laws of the state of Mississippi, and this law says that I can not issue this license," said Adams.

Five lesbian couples from South Mississippi entered the courthouse knowing their request for a license would be denied. Reverend Jasmine Beach-Ferrara says this peaceful action is a part of the "We Do" Campaign, which calls for full equality under federal law for lesbian, gay, bisexual and transgender people.

"Call for change under federal law, which we believe to be the most appropriate path way for LGBT people in the south to become equal citizens under the law, and for their fundamental right to marry to be recognized which it currently is not," said Ferrara.

Previous Post: « Andrew Sullivan Pulls in Well Over $100,000 from Independent Donors in First Day After Announcing Pay Site
Next Post: Don’t Pee Next to Shaquille O’Neal »