More than 50 pro-equality LGBT groups and allied groups sent a letter today to President Obama urging him to issue an executive order barring federal contractors from discriminating in employment on the basis of sexual orientation or gender identity, HRC reports: 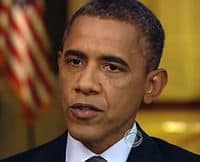 “Issuing an executive order is a crucial step toward ending workplace discrimination against LGBT people,” said Human Rights Campaign President Chad Griffin.  “After a historic pro-equality first term, President Obama could level the playing field for LGBT employees of federal contractors with the stroke of a pen and ensure they have an equal opportunity to succeed.”

“By banning federal contractors from discriminating against LGBT Americans, President Obama would extend the commitment to non-discrimination first made by President Roosevelt more than 70 years ago when he signed an executive order integrating the nation's shipyards and other worksites run by defense contractors,” said ACLU Executive Director Anthony D. Romero. “Taking this action would result in at least some workplaces in all 50 states having legally binding protections for LGBT Americans – a first in our nation's history."

“Nearly 175,000 Americans have signed Freedom to Work’s online petition asking President Obama to issue an executive order to save our taxpayer money from subsidizing workplace discrimination,” said Tico Almeida, President of the LGBT organization Freedom to Work.  “We are grateful to the dozens of national organizations joining today’s letter to urge the President that the time to act is now.”

Read the letter and see the list of signatories below: