Chief Warrant Officer and LGBT activist Charlie Morgan died this morning after a long battle with breast cancer. She leaves behind her wife Karen and young daughter Casey Elena. Her wife will not receive the same survivors' military benefits that heterosexual couples are awarded.

OutServe-SLDN Executive Director Allyson Robinson has issued a statement which reads in part: 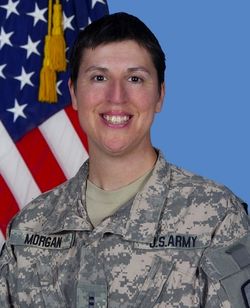 "Chief Warrant Officer Charlie Morgan, a courageous fighter for our country, for her family, and for the equality of all who wear the uniform of our nation, passed away early this morning. On behalf of her wife Karen and daughter Casey Elena, we thank all those who have supported Charlie so fervently since she proudly came out on national television on the day 'Don't Ask, Don't Tell' was repealed, and who have stayed by her side through her brave fight with cancer. She made an indelible mark on everyone she met with her integrity, her positive outlook, and her unflinching commitment to righting the wrongs visited upon gay and lesbian military families. The fight for full LGBT equality in this country is forever changed because Charlie Morgan took up the cause."

Morgan had hoped to live to see DOMA overturned. In November, she told journalist Andrea Stone:

“I’m praying that they take it up soon,” Morgan told me in a phone interview from her home in New Durham, N.H. a few days before Thanksgiving. “It’s my motivation for staying alive. I really need to be alive when they actually do overturn DOMA, otherwise Karen is not guaranteed anything.”

An online memorial site has been setup here.

Last summer, Andy posted a touching video in which Morgan and her family talk about their brave fight for equality. Watch it, AFTER THE JUMP.