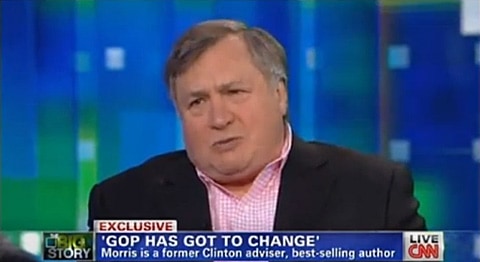 Piers Morgan shredded political strategist Dick Morris last night for his disastrous predictions of a Romney landslide, an error for which he has been cast out from FOX News.

Said Morris: "I was wrong. I was wrong at the top of my lungs."

Later, the discussion veered into one about the GOP and its positions on social issues, like abortion and gay marriage.

"My view on gay marriage is that if a state decides to go for gay marriage, the legislature or the voters, that's great. That's up to them. I've got no problem with it. I don't believe that the courts should jam it down anybody's throat.

As for his personal view? "If people want it they should be able to do it but it's got to be a decision of the community."