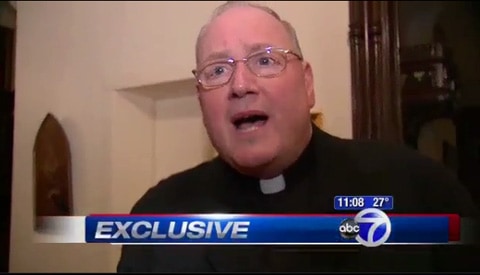 Cardinal Timothy Dolan was deposed by lawyers for hundreds of people sexually victimized by Catholic priests in Milwaukee during Dolan's tenure as archbishop there, the NY Daily News reports:

In the closed-door deposition, Dolan faced down attorneys for 350 of about 570 people who say they were maltreated by clergy in the Milwaukee Archdiocese, which he led until 2009, when he became the Pope’s New York man.

Dolan’s spokesman said Wednesday that the leader of 2.6 million New York Catholics — who has been discussed as a possible candidate for Pope — welcomed the chance to address the issue.

“Today Cardinal Dolan had the long-awaited opportunity to talk about his decision nine years ago in Milwaukee to publicize the names of priests who had abused children and how he responded to the tragedy of past clergy sexual abuse of minors, during the time he was privileged to serve as archbishop of Milwaukee,” spokesman Joseph Zwilling said in a statement.

ABC7 was there when Dolan arrived home from his deposition in Milwaukee.