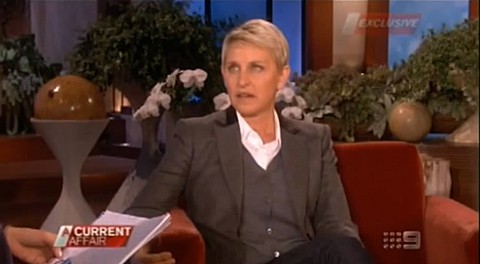 Ellen DeGeneres gave a lengthy interview to Tracy Grimshaw from Australia's A Current Affair about coming out, her show's success, and how being gay has shaped her life.

She added that coming out also put her through a range of emotions and financial situations:

I was furious at the time because…I just felt like it was my fault…I was so mad that I lost my show, and not just my show but for three years I didn’t have any offers. I mean literally, the phone did not ring for three years and I had no money….All of a sudden just because of one revelation (gay) I was the joke. I was the punchline of every late night talk show, I was made fun of in a magazine, and it felt horrible at the time. Now I look back on it and I am thankful because it gave me a chance to examine myself and say who are you without fame, who are you without success, who are you without money?”

Ellen also talked about what it was like growing up in the racist South and how that shaped her perspective. She also talks about her upcoming trip to Australia, Finding Nemo, bullying, Joan Rivers, and her dancing.

Watch the excellent interview, AFTER THE JUMP…