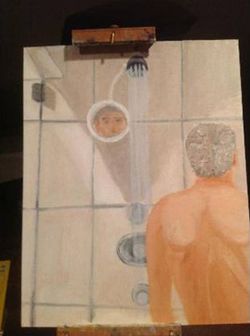 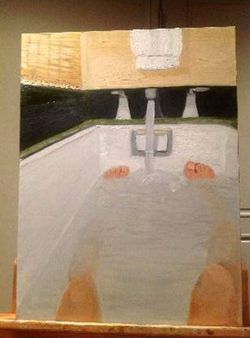 Allegedly painted by George W. Bush. Revealed by a hacker.

NY Mag's Jerry Saltz finds something to like about the former president:

Both border on the visionary, the absurd, the perverse, the frat boy. Each echoes the same isolation in small space. Rumination without guilt. Thought without dark nights. The light in each is soft, subtle, embracing, even oscillating. As if the unreal has become a companion to the painter. The first depicts a man with gray hair standing in a shower looking at himself and us in a small shaving mirror. We see him only from behind, from the waist up. The shoulders are slightly rounded. The features are Bush's. In the mirror is that stare, that empty, happy gaze. His eyes look slightly to our left, as if he can't meet our own gaze and is in a world of his own. The glass shower door echoes the well-to-do nature of the portrait of the stone home. But also the layers of visibility, transparency, fragility.

The other picture is the strangest, and the strongest. From over his shoulder, we see Bush looking at himself in the bathtub. This means we've seen two images of him cleansing himself, in warm water. It's already enough to set you off on fantasies of aloofness, aloneness, exile, and hiding. Bush regards himself. Yet nothing untoward is showing or seen. He is chaste and untouched even when alone. We see his knobby knees and his toes peeking up above the running water. A Freudian will have to tell us why the water is running in both pictures. Private baptism; trying to get clean; infantile ecstasies; purification rituals?