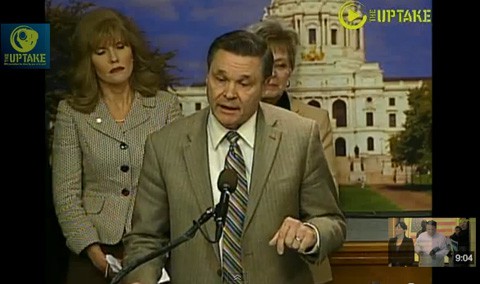 Minnesota State Rep. Glenn Gruenhagen, R-Glencoe appeared at a press conference yesterday in response to the introduction of a marriage equality bill (which has bipartisan support), and Gruenhagen intended to put the fear of God in the media.

"We're talking about gay marriage. We're not talking about an immutable characteristic like the color of your skin. The human genomap was completed in 2003. There is no gay gene. Okay? So the concept that you're 'born that way' and it's an immutable characteristic is an unscientific LIE. Okay? The human genomap has been completed. I urge you, as the news media, to give both sides a fair and open hearing on this debate because it has tremendous ramifications not only for our society but for our children in general."

The Uptake notes: "The latest research into a "gay gene" contradicts what Gruenhagen said. Research is focused on epigenetics, throwaway DNA that triggers hormone production in fetuses. Although scientists haven't found a "gay gene," they haven't found a straight one either. This isn't the first time Gruenhagen has made up facts. A few years ago, he claimed alcoholism and drug addiction is not a disease despite a consensus of medical opinion and evidence showing a physiological dependence."