An Indiana teacher has been suspended for anti-gay remarks, and you can probably guess who it is, the Indy Channel reports: 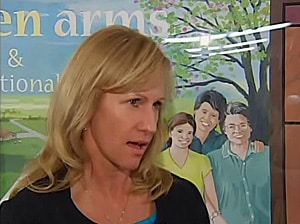 Superintendent Mark Baker of the Northeast School Corp. in western Indiana's Sullivan County issued a statement Wednesday saying the teacher has been placed on administrative leave and that state and local police are stationing officers at North Central Junior-Senior High School as a precaution because of "aggressive" email messages sent to the school and the teacher.

Baker did not identify the teacher, but special education teacher Diana Medley's comments have circulated widely on social networking sites amid news coverage of an alternative prom dance at a nearby school that would ban gay students.

Said Medley: "We don't agree with it (homosexuality), and it's offensive to us. Homosexual students come to me with their problems, and I don't agree with them, but I care about them. It's the same thing with my special needs kids. I think God puts everyone in our lives for a reason…I honestly don't [think gays have a purpose]. Sorry, but I don't. I don't understand it. A gay person isn't going to come up and make some change unless it's to realize that it was a choice and they're choosing God."