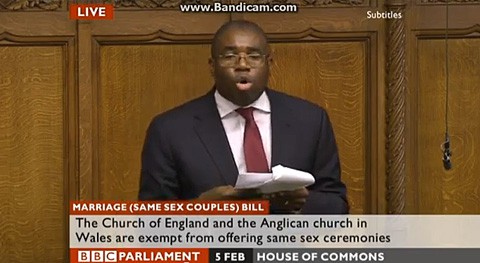 UK Labour MP David Lammy gave one of the most impassioned speeches during yesterday's debate that led to the House of Commons approval of the marriage equality bill.

It is an excerpt from the phrasebook of the segregationists and the racists. It is the same statement, the same ideas and the same delusion that we borrowed in this country to say that women could vote – but not until they were 30. It is the same naivety that gave made my dad a citizen in 1956 but refused to condemn the landlords that proclaimed “no blacks, no Irish, no dogs”. It entrenched who we were, who our friends could be and what our lives could become.

Separate is NOT equal, so let us be rid of it.

Because as long as there is one rule for us and another for them, we allow the barriers to acceptance to stand unchallenged. As long as our statute books suggest that the love between two men or two women is unworthy of being recognised through marriage, we allow the rot of homophobia to fester.