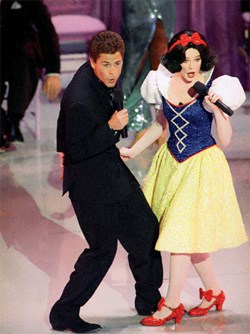 Rob Lowe's Snow White tells untold story of nightmare 1989 Oscars opening: "I
remember Bob Mackie said, 'Why am I making a Snow White outfit?' I
fainted once during a fitting because I hadn't eaten. I woke up, and Bob
was going, 'Honey, are you all right?' He gave me juice. My dress was
bought for $23,000 by someone involved with the production who was
buried in it. It was a man. I'm leaving it at that." Video can be viewed here.

VIDEO: Cat faces down a crocodile.

The Chelsea Clinton marriage equality ad the NBC News wouldn't allow to be aired because she was a special correspondent.

Australian censors ban Travis Matthews' film I Want Your Love over explicit scenes of gay male sex: "Melbourne Queer Film Festival director Lisa Daniel says that in her 15 years at the festival, I Want Your Love is the first film that has been refused an exemption. It has been seen in many festivals around the world, and its distributors have told her this is the first time it has been banned. Mathews is a well-known filmmaker, and the decision is an embarrassment for Australia, she says."

The 90's are back: 98 Degrees announces new album.

Eddie Redmayne is ready for the Oscars. 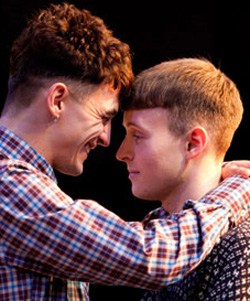 Beautiful Thing returns to London's West End 20 years after its debut. "It sort of hasn't really dated in as much as it's not just about being gay," said Harvey. "It is about first love and coming of age, as well as coming out."

Homophobic evangelist Scott Lively offers "proof" that Obama is gay: "Today, he finds new 'proof' in a Weekly Standard article which notes that Obama went on a weekend trip with his aide Reggie Love over the weekend…without the First Lady."

Justin Timberlake and Jay-Z announce 'Legends of the Summer' tour.

These idiots would own a whole bunch of guns.

John McCain tells Aurora shooting victim's mom she needs 'straight talk': "I can tell you right now you need some straight talk. That assault weapons ban will not pass the Congress of the United States," McCain responded. The video, posted Thursday by Phoenix's KTVK, showed the line drawing applause and cheers from the crowd. 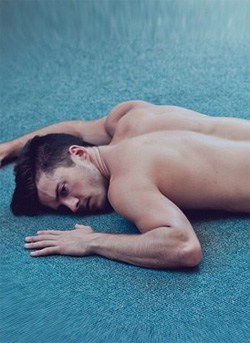 Gay Olympic speed skater Blake Skjellerup takes it all off: "To me, I wouldn’t call the pictures nude, more artistic, capturing the hours of blood, sweat and tears I put in to training my body." Photos (work-unfriendly) here and here.

Judy Shepard just saw The Laramie Project for the first time: "I just really didn't feel I needed to watch it because I lived it. And so many of the scenes bring back such horrific memories. I've never felt comfortable crying in public," Shepard said just before the Saturday performance. "It's been 15 years. I should be able to do this now." Read Naveen's review of the new production HERE.