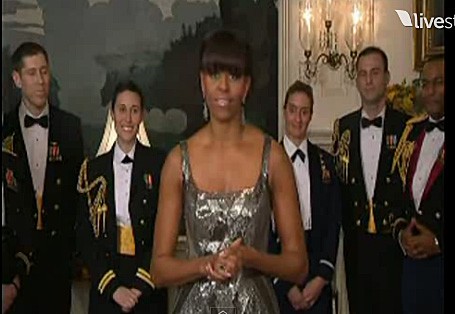 Apologies for this was the best quality embeddable clip I could find of FLOTUS delivering the Best Picture Oscar in a surprise appearance live from the White House.

Dominic Patten at Deadline writes abou how the appearance came together:

“The Academy Awards approached the First Lady about being a part of the ceremony. As a movie lover, she was honored to present the award and celebrate the artists who inspire us all — especially our young people — with their passion, skill and imagination.”

The idea of getting the First Lady on the show first came from Lily Weinstein, who mentioned it to her big Obama contributor dad Harvey, who suggested it to the Oscar producers Craig Zadan and Neil Meron and Academy president Hawk Koch. The group flew to DC a week and a half ago to put the logistics together with the White House. The Oscar producers told Deadline’s Pete Hammond earlier this week that they “were being like the CIA” about a couple of surprises on the show, keeping things top secret. In towns like Hollywood and DC where people love to talk, they pulled it off. There was no indication on the show’s rundown and most of the people on the Oscars had no idea who the secret guest would be. “I knew we could do it and we did it,” Koch told Deadline tonight about keeping Obama’s name under wraps.

The First Lady was actually handed the envelope with the winner’s name in it by the head of PricewaterhouseCoopers at the White House, where she and President Obama hosted a dinner for the nation’s Governors tonight. Nicholson had a back-up envelope just in case.