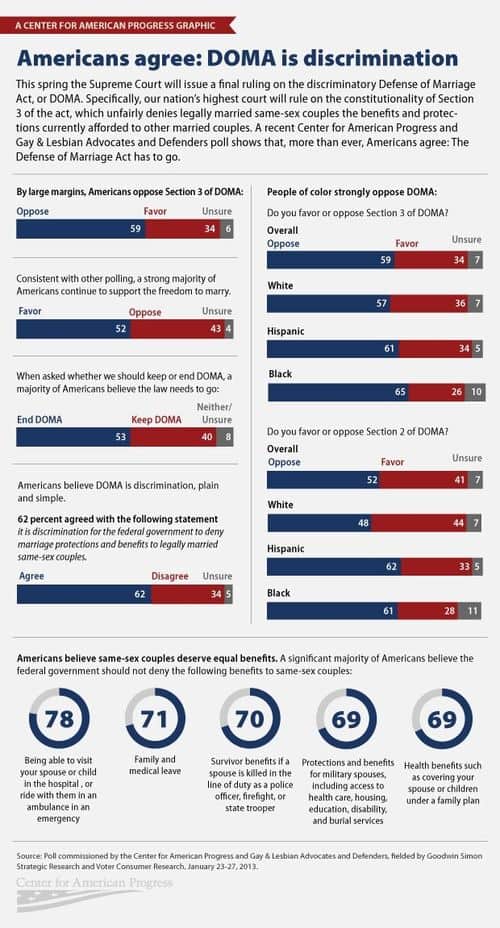 A new poll commissioned by the Center for American Progress and Gay & Lesbian Advocates & Defenders and conducted by the Goodwin Simon Strategic Research and Voter Consumer Research examines views about DOMA, suggesting that its repeal is far overdue.

Nearly six in ten (59%) registered voters oppose Section 3 of DOMA, which requires the federal
government to treat legally married same-sex couples as unmarried for the purposes of federal benefits
and protections. Just one-third (34%) favor this part of DOMA, while six percent are unsure.

Shedding insight into these findings is that 62 percent of respondents agree that “it is discrimination for
the federal government to deny marriage protections and benefits to legally married same-sex
couples.” Just 34 percent disagree with this statement, while four percent are unsure.

“With each passing day, more and more Americans are learning how DOMA denies important marital protections and heaps disrespect on married same-sex couples across the country – and they’re saying, ‘Enough is enough,’ Bonauto said. “It’s not surprising that a majority of this country now believes that loving, committed couples in legal marriages should be treated fairly under federal law. It’s time for our laws to catch up with where public opinion is on abolishing DOMA.”

Previous Post: « Towleroad Guide to the Tube #1310
Next Post: Former Family Research Council Intern Tries to Explain Why She’s Not What the Tape on Her Mouth Says She Is: VIDEO »