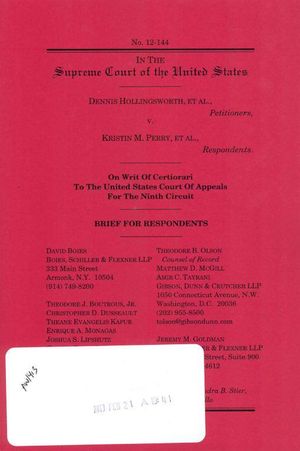 Last week, the American Foundation for Equal Rights (AFER), the organization running the federal challenge to Prop 8, submitted its brief to the U.S. Supreme Court in Hollingsworth v. Perry. The brief, written by Ted Olson and David Boies (or, more accurately, their associates), is a talisman to equality. It is a testament not only to the justice of our cause — the cause of the freedom to marry — but to its place in the American legal tradition. It also puts pressure on President Obama, an avowed supporter of our community and our right to marry, to get involved in the case.

All legal briefs are stories. You are trying to prove that your client's version of reality is the reality, and this is something that the Olson and Boies team did remarkably well. They make the freedom to marry seem so logical, so natural, so much in line with the American progressive tradition.

The amicus brief filed by more than 75 prominent Republicans tells a different story, taking a unique path to the same destination. For these Republicans — including former Utah Governor and candidate for the Republican nomination for President John Huntsman, former George W. Bush adviser Ken Mehlman, and Republican Congresspersons Ileana Ros-Lehtinen (R-FL) and Richard Hanna (R-NY) — recognizing the freedom to marry for gay Americans is part of the same legal tradition that gave us the much loathed-by-progressives Citizens United.

Both briefs are worth discussing at length. Look forward to columns dedicated to each. For now, I would like to summarize their analyses briefly and argue two things:

First, the presence of AFER's vision and the arguments of Governor Huntsman et al. at the Supreme Court make it almost impossible for the Obama Administration not to get involved. To sit on the sidelines, even if all the President does is repeat the arguments offered by AFER and this small group of Republicans, would put him behind the very vanguard he has been leading for some time. Second, the presence of several Republicans as signatories — including the very recently pro-Prop 8 and candidate for California governor Meg Whitman — suggests either that the world is changing even faster than we thought or that the Republican leadership is taking a craven approach to the codswallop it has been serving to its homophobic base. Politicians who actually hate and want to discriminate are bad enough; those who don't care and adopt the position of hate just to achieve power are indefensible. 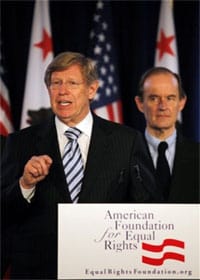 For us, the freedom to marry sits squarely within the American progressive tradition of fundamental fairness and equality. Constitutional lawyers have special terms — substantive due process and equal protection — for those basic concepts and both are on prominent display in AFER's brief to the Supreme Court. The decision to marry, AFER argues, is a right of fundamental importance, one recognized by the Supreme Court 14 times in a diverse array of cases. It is so fundamental that the Court has refused to limit the right of even prison inmates to marry, for example. When a right is so fundamental, any restrictions on that right have to pass a high hurdle to pass constitutional muster; Prop 8 doesn't even clear a low hurdle. Prop 8 also violates equal protection because it treats identical couples differently simply on the basis of their sexual orientation. AFER argues that such discrimination can only be constitutional if it passes a high hurdle — namely, heightened scrutiny — that puts a considerable burden on Prop 8 proponents to argue that banning gays from marrying somehow advances an important social interest; but the brief makes the correct argument that Prop 8 cannot survive under any level of scrutiny. Of course, raising well-adjusted children encouraging opposite-sex couples to have their children inside marriage are not consequences of keeping gays out of the institution of marriage. Therefore, marriage discrimination must go.

The Republicans who filed their brief in support of the freedom to marry don't disagree with AFER's analysis; in fact, their brief starts from the premise of the existence of the fundamental right to marry. But they chose to emphasize a different part of the American legal and political tradition and imply that Prop 8 is no longer justified rather than never justified. The Republicans argue that the institution of marriage is central pillar of human freedom and limited government, situating themselves within the classically liberal tradition of individual rights. They also argue that although the judicial directive is one of restraint, courts cannot remain blind to developing social science: Prop 8, like other laws that outlived their purposes, is "outmoded" and subject to equal protection challenge because the newest social science evidence suggests that there is no difference between opposite-sex and same-sex couples.

Notably, I agree with where the Republicans' brief ends up — namely, calling for the end of Prop 8 and all bans on the freedom to marry; but I cannot abide either of the Republicans' arguments. Marriage is not simply about freedom. If it were, why is the state involved in it at all? And, for that matter, why are we stopping at two-person marriages? Plus, Prop 8 is not "outmoded." It was never a constitutionally justified form of social policy. It was always bald discrimination regardless of whether 75 Republicans bought into the biased pseudo-science and outright lies that got Prop 8 passed in the first place. 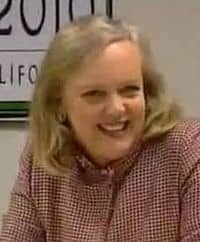 I also cannot bring myself to embrace the theory that all these Republican signatories have legitimately "evolved" on the freedom to marry. Some of them, including prominent congressional voices from the past decade, came to Congress before "gay marriage" entered the public consciousness. They may have truly evolved, and I heartily embrace their support! But, Republicans like Meg Whitman, who ran for governor of California on a staunch pro-Prop 8 platform just 2 years ago, is either the beneficiary of rapid social chance or a craven politician who never really believed in discrimination but was willing to say anything to get elected. In a way, that form of anti-gay leader is worse than the true believer. The latter has the benefit of honesty of conviction, however disgusting and hateful those convictions might be. The Meg Whitmans of the world were willing to destroy the lives of gays just to achieve power.

But the Republicans' brief may serve an essential legal and political purpose. It is clear that if Prop 8 is going to be declared unconstitutional, it will be because of the vote(s) of one or several of the Court's conservative justices. The Republicans' brief not only gives these justices a conservative legal argument to vote against Prop 8, it also gives them political cover and provides evidence of an emerging consensus across the political spectrum that bans on gay marriage are things of the fringe.

This argument is unpersuasive. The justice most likely to support a ruling against Prop 8 — Anthony Kennedy — has shown remarkable affinity for the progressive vision at the heart of AFER's brief, making the Republicans' arguments a nice cushion, at best. His opinions in Romer v. Evans and Lawrence v. Texas reveal as much. After all, as Kenji Yoshino has noted, "Justice Kennedy likes two things: states rights and gay rights."

But even if I disagree with the thrust of the Republican brief legal vision, it puts just the right amount of pressure on President Obama to file his own brief in opposition to Prop 8. There is no reason why he shouldn't: Everyone knows he is in favor of the freedom to marry and the uplifting rhetoric of his second inaugural address suggests that he no longer clings to the quixotic states-rights version of civil rights progress. The Republican brief now puts some members of the opposition party at the vanguard of the marriage debate. The President cannot cede that space to the Republicans, even if the lion's share of the Republican Party still supports marriage discrimination.