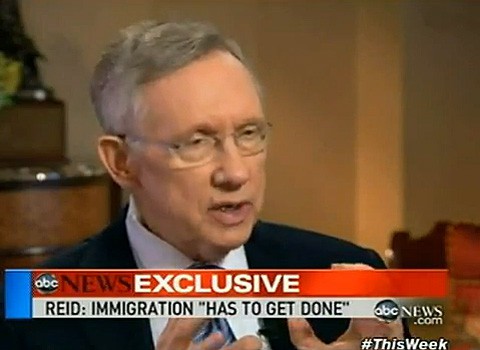 Steve mentioned this interview in his round-up yesterday but I thought I'd post the clip of Harry Reid telling George Stephanopoulos that same-sex families need to be included in immigration reform.

GEORGE STEPHANOPOULOS (HOST): One of the other big issues, the President said he wants gay and lesbians to be able to have a family preference. Senator McCain has said we shouldn’t come up with legislation for what he calls social issues.

REID: If we have gay folks in this country who have children, or they come from some other place they should be protected just like any other child.

STEPHANOPOULOS: That’s the position the Republicans are saying that’s too heavy to lift.

Meanwhile, Senator John McCain is trying to do just that: 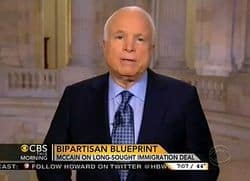 But congressional Republicans immediately condemned the idea and warned that the measure imperils broader immigration reform. Sen. John McCain (R-Ariz.), one of the senators on the eight-member bipartisan working group on immigration, said at a Politico breakfast last week that injecting social issues into the debate over immigration legislation “is the best way to derail it.”

“Which is more important: LGBT or border security?” McCain said, using an abbreviation for people who are lesbian, gay, bisexual or transgender. “I’ll tell you what my priorities are.”