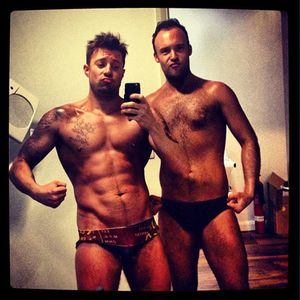 PHOTO OF THE DAY: British boybander Duncan James puts Instagram to good use.

Clive Davis has a memoir on the way and in it he not only reveals that he is attracted to both sexes, but also that he is currently involved with a man. He also mentioned in a recent Nightline interview that he believes that the subject of bisexuality is "much maligned." Azealia Banks continues to receive her due flack for her support of the word "faggot". Gay filmmaker Ryan James Yezak performed this open rap for her in an attempt to get her to stop using the word. Also, she and GLAAD really don't get along.

Here is something a little un-Kylie from Kylie Minogue. A collaboration with the experimental electronic group "Mum". And it seems that late street photographer and genius Vivian Maier is finally getting her due.

Watch Jimmy Kimmel's viewers crap all over their relationships for our amusement!