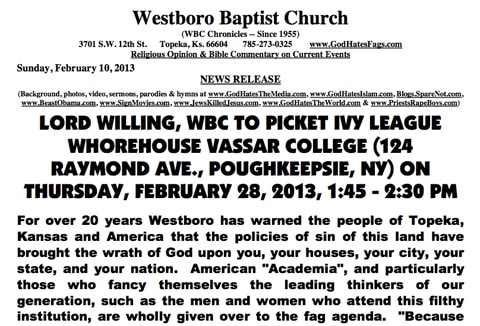 I mentioned this in my round-up yesterday, but I have to give it more attention, partly because it's awesome and partly because I am A PROUD ALUMNUS ('89) of this so-called "Ivy League Whorehouse". 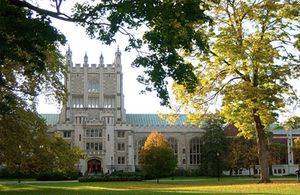 Westboro Baptist Church is planning a protest at Vassar on February 28.

In response, students organized a fundraiser for the LGBT suicide and crisis intervention organization The Trevor Project:

The Westboro Baptist Church has announced that they will picket Vassar College on Feb 28th. In response, we are raising money for the Trevor Project, "the leading national organization providing crisis intervention and suicide prevention services to lesbian, gay, bisexual, transgender, and questioning youth." Our goal is to raise $4,500, or $100 per minute that the WBC is planning to protest for.

The fundraiser has attracted thousands of donors and its total was at $43,709 as of this posting.

Yesterday I sent an email to the campus community about plans announced by the Westboro Baptist Church of Topeka, Kansas, to picket Vassar on February 28 in protest of our open support of LGBTQ students, employees, and alums. As I said in that message, we look forward as a college to any opportunity to counter messages of hate and bigotry and to underscore our values. Since the campus and alumnae/i became aware of Westboro's plan, we have received an outpouring of support for reaffirming our commitment to inclusion. Many of you have posted similar sentiments on Facebook, Twitter, and other social media. The responses from members of our community, while not surprising, have been remarkable and have made all of us who have read them proud to be part of Vassar.

In the face of Westboro's statements, we want to celebrate the inclusiveness of our community and the multitude of backgrounds, interests, and preferences that enrich our experiences. In an effort to coordinate activities that members of the campus and alumnae/i communities are planning, the senior staff of the college has organized a group representative of students, faculty, staff, and alumnae/i to serve as a clearinghouse and sounding board. I know they will foster an array of events that will speak powerfully to our values.

And students are saying, bring it on:

Although the event is set to take place three weeks from now, on February 28, 2013, the Vassar community is already making preparations. An all-campus meeting has been scheduled to take place at the UpC Cafe at 10pm tonight to mobilize the student body and counter the Westboro Church.

“The Vassar community is so creative and intelligent, and I look forward to working with students and staff to figure out a response that shows the strength and inclusiveness of our community,” wrote Assistant Director for Campus Life Judy Jarvis in an emailed statement.

Donate HERE if you want to help out the fundraiser.