The Obama administration is still thinking about whether or not to file a SCOTUS brief opposing Proposition 8 while Thursday's deadline looms, the NYT reports:

A White House official said Tuesday morning that no decision has been made on whether to file an amicus brief; the deadline is Thursday. The Wall Street Journal, citing unnamed sources, reported Tuesday evening that the administration was still weighing its decision, and is “looking at options that fall short of embracing a constitutional right'’ to same-sex marriage.

Mr. Obama has made supporting same-sex marriage a central theme in his recent speeches, including his second inaugural address and has often stated that Americans ought to have equal rights, “no matter who you love.” He announced during his re-election campaign last year that, after months of saying his views were “evolving,” he had concluded gay couples ought to be allowed to marry.

Meanwhile, the WSJ (subscription) reports that Obama is concerned that opposing Prop 8 could annoy conservative justices, according to Business Insider:

"[A]dministration lawyers worry that taking such an expansive view in legal briefs could unnerve some justices in the Supreme Court's conservative wing, the people familiar with the matter said," the Journal reported.

Will it or will it not file is today's biggest question. 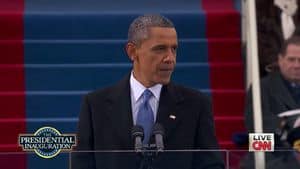 The NYT looks at the dangers of Obama NOT filing and tells him to do so:

The outcome of the Proposition 8 case is likely to affect the lives of gay, lesbian and bisexual Americans for years to come, even if the final disposition is not sweeping enough to wipe out all state laws currently banning same-sex marriage. A strong filing by the Justice Department, forthrightly declaring that denying the freedom to marry violates the Constitution, would put the full weight of the federal government on the side of justice and could influence the shape of the ruling.

For the administration to be missing in action in this showdown risks conveying a message to the justices that it lacks confidence in the constitutional claims for ending gay people’s exclusion from marriage or that it believes Americans are not ready for a high court ruling making marriage equality the law of the land — impressions strikingly contradicted by legal precedent, the lessons of history and by the president’s own very powerful words.

It’s entirely possible that the Justice Department, or someone else in the Obama administration, has found a non-gay reason for why they don’t want to file a brief in the Prop 8 case.  They’re afraid that somehow, somewhere, in some way filing a Prop 8 brief will negatively affect some other unrelated thing that they care about.

It’s just a hunch. But it’s the most logical explanation I can find for why no brief has been forthcoming in light of the overwhelming evidence in favor of them filing such a brief.

Either way, if no brief is filed, the administration is going to have to come up with a much better explanation for their actions.  The current non-explanation is not only not cutting it (triple negative, I know), but considering that everyone and his brother has now filed a brief in the case – even the Mormons have weighed in (spoiler alert: the Mormons have chosen the gay-bashing side) – the administration’s absence runs the risk of speaking volumes to the court, and beyond.