Michelle Shocked's "God hates fags" rant on Sunday night has caused 10 of the 11 venues at which she had planned concert dates on her tour to cancel, Billboard reports: 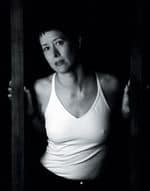 March 23 at McCabe's in Santa Monica
March 28 at Moe's Alley in Santa Cruz
March 29 at HopMonk in Novato, CA
April 24 at the Palms Playhouse in Winter, CA
April 25 at the Alberta Rose Theatre in Portland, OR
April 26 at Meanders Kitchen in Seattle
April 27 at Cozmic in Eugene, OR
May 3 at eTown Hall in Boulder, CO
May 5 at S.P.A.C.E in Evanston, IL
June 23 at the Telluride Bluegrass Festival

The only U.S. date that has not canceled Shocked at this point is the Harmony Bar in Madison, WI, where a person answering the phone Tuesday evening responded, "I won't know a damn thing until the boss comes back in eight days."

Meanwhile, a longer transcript of Shocked's remarks has emerged since the first reports.

UPDATE: AUDIO has emerged of her remarks.

Previous Post: « Michele Bachmann Won’t Back Up CPAC Lies She Told About Obama, Runs from CNN: VIDEO
Next Post: MinusIQ, The Pill to Lower Your IQ Permanently: VIDEO »