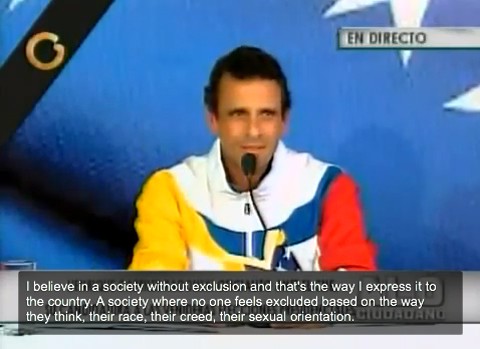 In a video recorded after a social media campaign by supporters intended to get Capriles to speak out against Maduro's homophobia, he did so.

I'd like to send a respectful and considerate message in rejection to the homophobic remarks made by Nicolás [Maduro] today. It's not the first time. I believe in a society without exclusion and that's the way I express it to the country. A society where no one feels excluded based on the way they think, their race, their creed, their sexual orientation. People should go out and reject it.

If that's how you want to attack me, let it be. But from here on I will always demand respect for all Venezuelans. Because the society that we want to build in Venezuela is a society without exclusion.

You cannot talk of inclusion if there is exclusion. There should be overwhelming rejection of something like that.

Previous Post: « Towleroad Talking Points: Gay Man Gets Revenge
Next Post: College Student Asks His Idol Billy Joel if He Can Accompany on Piano, and Results Do Not Disappoint: VIDEO »