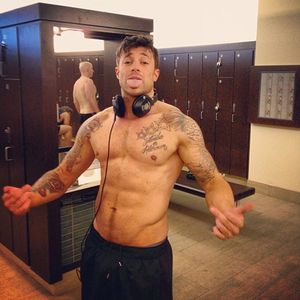 A gay man turned the tables on a bigot in his neighborhood who called him a faggot. Watch as the man lets this fool hang himself with his own words. The Boy Scouts have decided to poll their pack leaders about their thoughts on gay-specific hypothetical situations and Towleroad has obtained some of the polling questions.

Proving that they continue to a bastion of enlightenment, Kentucky has passed a bill that would protect a bigot's right to discriminate against gays. Louis Farrakhan was recently in Belize and took some time to let the country know that he is not pleased with their weakness on properly persecuting gays. And wingnuts are pissed at a Massachusetts school for planning to mount a performance of "Adam & Steve".

While in Austin to promote Spring Breakers, James Franco told the assembled media that his support of and appearance in gay-themed films has harmed his image with advertisers. The gay dads, whose touching story about how they miraculously found and adopted their son was recently featured in the New York Times, sat down to share that story with Anderson Cooper.

A quarter of ABBA is back with a new single and video. It seems that despite reports over the weekend that Elizabeth Hasselbeck would be leaving The View, the conservative talking head will be staying put. But there is good news in the form of four more years of Ellen!

I must admit I have never heard of Ukrainian Synth Pop but after watching Kazaky's video for their song "Crazy Law" maybe I should educate myself. This video will make you big truck owners think twice about dinging a Porsche. Also some kind of crazy swiss weasel wrecked havoc at a soccer game over the weekend.