Columbia University Medical Center recently established a new groundbreaking LGBT Health Initiative. Never before has a medical school included such specialized training in LGBT issues as part of its curriculum
for physicians and psychiatrists 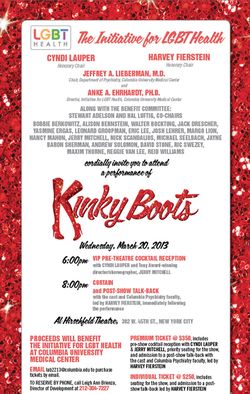 The director of the initiative, Anke A. Ehrhardt, Ph.D., who is also Director of the Division of Gender,
Sexuality, and Health at  the NYS Psychiatric Institute and the
Columbia University Department of Psychiatry, explained the program in a memo sent out late last month.

Across the lifespan, new issues are emerging, including LGBT youth coming out at  earlier ages, new family identities being forged by same-sex marriage and co-parenting, relationships, and the aging of the first openly LGBT generation. We will  bring together scientists, clinicians, educators, and policymakers to respond comprehensively  to the critical issues facing LGBT people. For example, families, schools, and health providers  are often ill-prepared to offer support to LGBT youth, which increases their vulnerability to shame, low self esteem, isolation, loneliness and self-harm. We will conduct the research necessary to develop the tools that families, schools, and health providers can use to strengthen resilience among LGBT people. Such research will also inform the training of the  next generation of clinicians and educators and drive public policy to improve the climate of  schools and communities so that LGBT youth can thrive.

The Initiative’s research efforts will recognize the diversity within the LGBT population  and the urgent need to understand the intersections among gender identity, sexual orientation,  race/ethnicity, social class, and age, as well as the specific needs of different groups.

Said Dr. Walter
O. Bockting PhD, the initiative's co-director: "Almost every day in the news, there is another sign of progress in
fighting stigma and in confronting the inequities found among the LGBT
population. However, despite this dramatic increase in public awareness,
research to guide this progress and training in evidence-based,
culturally competent health care has lagged behind. To fill this gap, we
will take LGBT health research, practice, education, and policy to a
whole new level by working collaboratively with faculty and students,
colleagues in the field,  affected communities, and policymakers."

So important is this initiative to the LGBT community that the new Broadway musical Kinky Boots is hosting a special one-night only event at the show, featuring a pre-show cocktail
reception with composer/lyricist Cyndi Lauper and director Jerry Mitchell, and a post-show talkback
with book writer Harvey Fierstein. The evening will be co-sponsored by Broadway
Cares/Equity Fights AIDS, and all proceeds will go directly to program development for the Initiative
for LGBT Health.

So if you're interested in seeing Kinky Boots and want to help Columbia implement this new initiative, you can get tickets to the benefit performance, the pre-show cocktail reception and post-show talk-back by calling Leigh Ann Brienza, Director of Development, at 212-304-7227, or by email at
lab2213@columbia.edu.

There are still a few tickets left I'm told. Click the flyer for more details.

Previous Post: « One Direction’s Harry Styles Got a Massive Abdominal Tattoo
Next Post: Sarah Silverman Will Be Making All Your Videos Now: VIDEO »