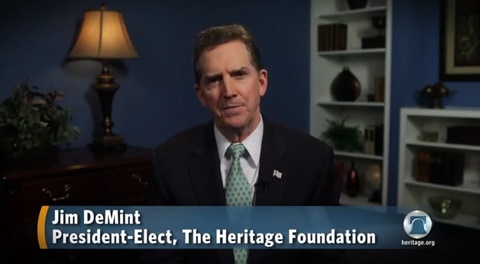 Former Senator Jim DeMint, who resigned in December to head up the homophobic Heritage Foundation, appears in a new video asking people to join him at the anti-gay 'March for Marriage' before the Supreme Court on March 26.

Says DeMint in the video: "Let's stand and defend the institution of marriage, which existed long before government to provide children with mothers and fathers…"

NOTE: You can counter DeMint's call for bigots by finding a local action at United for Marriage or join in the rally in D.C. on March 26th and 27th.