On Tuesday and Wednesday, March 26 and 27, the Supreme Court will hear more than 3 hours of arguments in the challenges to the constitutionality of California's Proposition 8 (Hollingsworth v. Perry) and the Defense of Marriage Act (Windsor v. United States). In a series of short posts, I will preview and summarize the legal issues that will be raised. Today, the constitutionality of Prop 8 and DOMA.

We've discussed the preliminary jurisdictional question of standing, without which, the Supreme Court cannot hear the Prop 8 and DOMA cases. We've also discussed the first substantive question of scrutiny, which the Court may not even fully answer. Now, we can discuss the underlying question: Assuming standing and given a particular level of scrutiny, are Prop 8 and DOMA unconstitutional?

The Court could answer these questions any way it wants. DOMA is especially subject to a federalism critique — namely, marriage law is the exclusive realm of the States and a federal definition of marriage is a gross expansion of federal power. Notably, Massachusetts District Court Judge Joseph Tauro and the First Circuit Court of Appeals referenced federalism concerns in both of their decisions striking down DOMA in Gill v. OPM. The Court could also follow Judge Vaughn Walker and use the operative Due Process Clauses to find that a broad fundamental right to marry applies to gay persons just like it applies to everyone else.

Let's keep it simple, though, and focus on equal protection. The standard rule is that the Constitution does not countenance treating similar citizens differently without a good reason. Disparate treatment is especially odious when the discriminated citizens are part of a traditionally disadvantaged group and it is most likely to fail the higher the level of scrutiny.

I think Prop 8 and DOMA fail under any level of scrutiny, even the low rational basis, because the proponents' justifications for both laws are completely divorced from the effects of those laws. A law that simply takes away the word "marriage" from gay couples who have every other right to raise children and create a family and a law that simply denies federal benefits to already married gay couples can have no rational connection to the government's interest in encouraging heterosexuals to marry. The very irrationality of these laws may hearten us as we look forward to favorable pro-equality decisions in June, but may also put a heightened scrutiny determination out of reach.

If the level of scrutiny is the height of the hurdle on the track, equal protection is why we're running the race. Even though the Constitution guarantees equal protection, no right is absolute. We allow for certain kinds of discrimination and classifications among populations that we don't think are so bad; for example, there are really good reasons to discriminate on the basis of age when it comes to voting. At a minimum, we don't look at age discrimination as carefully as we do racial discrimination because of this country's history of bigotry and the lack of any rational reason to discriminate among races.

So, every equal protection case asks the same question: Is there a good enough reason for this particular deviation from full equality? In the DOMA and Prop 8 cases, the answer is no.

During the course of the Prop 8 and DOMA cases, proponents of those laws have offered a whole host of reasons for upholding those laws.

The Argument: Gay marriage has to be banned because we have an interest in protecting traditional notions of morality and traditional marriage.

The Response: Even if we accept that the government has an interest in upholding traditional morality, the Supreme Court has said — in Romer v. Evans and Lawrence v. Texas – that morality alone, especially morality-based disapproval of a particular group, can never be enough to justify discrimination against that group.

The Argument: Prop 8 and DOMA are ok because the government has the right to allocate scarce government resources however it sees fit. Edie Windsor wants more than $350,000 back and gay marriage would cost California money. We can't afford that.

The Response: This argument is almost silly. Assuming you can make decisions like this based on dollars and cents, not only is the freedom to marry a financial boon, but the Supreme Court has said that administrative concerns could never, without more, justify discrimination against traditionally disfavored persons.

The Argument: DOMA was necessary to maintain the status quo while the states work out the freedom to marry on their own, and to maintain uniformity in federal marriage law.

The Response: DOMA did nothing of the sort. The states would be working out the freedom to marry with or without federal benefits being given to already married gay couples. More importantly, DOMA actually changed the status quo: Before DOMA, the federal government accepted as married whomever the states said were married. And, DOMA actually made "federal marriage law" less uniform. It left intact variations among the states about the age at which you can marry and what kinds of familial relations (first or second cousins, for example) could marry. It singled out gay people and nothing more. 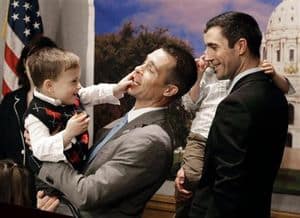 The Argument: The rest of the arguments have something to do with raising children and creating families, like fostering the creation of the "optimal parenting structure." The only remaining argument offered by the Prop 8 and DOMA proponents at the Supreme Court is that the government can ban gays from marrying and deny them marriage benefits because it has an interest in encouraging heterosexuals to marry so that children are not born out of wedlock. Opposite-sex couples can procreate accidentally, same-sex couples cannot. Therefore, we need to make sure those accidental pregnancies result in children being born inside a marriage.

The Response. There are many.

First, take note of the remarkable turnaround in how conservatives are arguing about gays and gay rights. It used to be that gays did not deserve the state's protection and our behavior could be criminalized because we were diseased, promiscuous, incapable of settling down and loving, and just interested in sex. The accidental pregnancy argument turns that around. Now, the state is worried that straight boys can't keep it in their pants and willy nilly impregnate their woman of the day (or, to be fair, the state may also be worried that straight women are too promiscuous themselves).

Second, although I agree that the state has an interest in encouraging people to marry, that legitimate state interest is not at all connected with banning gays from marrying or denying health care benefits to already married gay couples. If you want to encourage people to marry, eliminate the so-called marriage penalty tax. The only way that denying gay people the freedom to marry could encourage heterosexuals to marry is if we assume that opposite-sex couples only want to marry because gay people can't. That's bald hatred and just wrong.

DOMA and Prop 8 violate equal protection under any standard. Two decisions like that from the Supreme Court would be victories for our community. But, the utter irrationality of both laws may make a heightened scrutiny decision unnecessary. The rule of thumb at the federal courts is that judges should not decide any more than absolutely necessary to answer the question in front of them. Look for this axiom to particularly persuasive to the prototypical moderate on the bench, Justice Stephen Breyer. He has, in several cases, separated from his traditional liberal allies (Ginsburg, Stevens, Souter, Sotomayor, and Kagan) to make narrower holdings that they would have preferred. It is for this reason that I remain skeptical that the Court is willing to make an explicit pro-heightened scrutiny decision: I'm not even sure we'll get Justice Breyer, let alone one of the conservatives.