Some interesting stats from an ESPN survey via Buzzfeed. 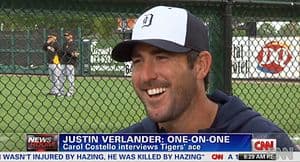 — Asked "do you know of any gay players?" only 5% (six players) said yes. "Yes, but that's as far as I want to go, even if this is anonymous," said one National Leaguer.

— 46% said they own a firearm — and these 51 players have a total of 258 guns. "Let me ask you something," says one pitcher. "If you were rich and famous and your salary was in the newspaper every week, would you worry about your wife and kids? That's why I have guns."

The move among straight guys in athletics and other ultra-manly arenas is reflective of a national trend that shows the majority of Americans support marriage rights for same-sex couples. But it is also indicative of the place of the “tough guy” in society, said sociologist Michael Kimmel, who directs the Center for the Study of Men and Masculinities at the State University of New York at Stony Brook.