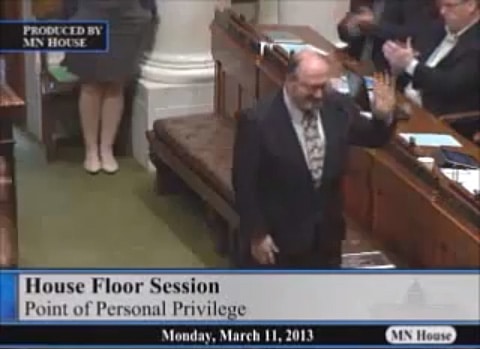 As we noted earlier, hearings are underway in Minnesota House and Senate panels on a bill that would legalize same-sex marriage there.

In late February when the bill was introduced, Rep. Glenn Gruenhagen (R) appeared at a press conference to tell the media that gay people who say they're "born that way" are lying.

"We're talking about gay marriage. We're not talking about an immutable characteristic like the color of your skin. The human genomap was completed in 2003. There is no gay gene. Okay? So the concept that you're 'born that way' and it's an immutable characteristic is an unscientific LIE. Okay? The human genomap has been completed. I urge you, as the news media, to give both sides a fair and open hearing on this debate because it has tremendous ramifications not only for our society but for our children in general." 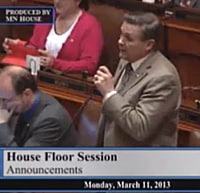 Said Gruenhagen to the House:

I have a close friend here — the last couple years — his name is Kevin Petersen. Kevin, why don’t you stand up and say hi? The interesting thing about Kevin is he was active in the gay lifestyle for about 10 years, and then he left it, got married, and he now has three children. Thank you.

Watch Gruenhagen introduce his "ex-gay" buddy, AFTER THE JUMP…