Gay adult film actor Wilfried Knight has died, his friends in the business Matthew Rush and Chris Yosef confirmed this evening. Knight began his career as part of Lucas Entertainment and appeared in dozens of films. 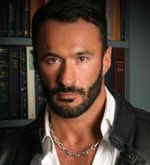 Knight's death, the details of which have not emerged, comes just weeks after his partner Jerry Enriquez committed suicide.

And i was in love, and so was my partner. He let me be who i wanted to be. He did not agree with everything i was but he let me be. He gave me the best 8, almost 9 years of my life. And this amazing guy committed suicide by hanging last week, after fighting for so long for us to stay together.

"Born in 1977 and growing up in Champagne, France, the 35-year-old actor appeared in over 10 Raging Stallion productions in the last four years. Originally an exclusive for Lucas Entertainment, Wilfried became the first-ever joint Lucas/ Raging Stallion exclusive. He was a consummate performer and a joy to have on set, which was why he was chosen to appear in the studio's major releases. He contributed to the success of the biggest industry hits from Raging Stallion, including Cowboys, Giants, Tales of the Arabian Nights and Focus/Refocus.

"His skills and talent didn't go unrecognized; he won the 2010 GayVN Award for Performer of the Year, and he took home the 2011 Grabby for Best Versatile Performer.  A man of stature, standing 6'2" and weighing in at nearly 200 pounds, Knight had a huge presence, a gracious air, and a caring disposition. His charm and humor did not go unnoticed. All of these traits are what made him a superstar of the industry.

"While the details of his death are not yet know, Knight recently lost his partner of nine years to suicide.

"Chris Ward, Falcon/Raging Stallion Studios President offered these sentiments about his friend: 'Wilfried's death is a blow to our studio and to our industry. There was no nicer man. We have all lost someone very special. I can only say that personally I am devastated. Wilfried was a friend and I shall miss him. All of us at Falcon and Raging Stallion Studios hope he is at peace, and our thoughts are with his family and friends. I know that his good friend and director, Tony Dimarco, is also greatly saddened by this tragic loss.'"

The studio also issued this collective expression of loss:

"We grieve deeply at the passing of Wilfried Knight. We offer our most genuine thoughts of sympathy and warm wishes to Wilfried's family, friends and loved ones. He was an extraordinary talent and a special man who brought joy to our hearts. Wilfried, we celebrate your life and your accomplishments, and hope that you rest in peace. You will be missed greatly."