Overshadowed by this week's historic marriage equality Supreme Court hearings was a lawsuit filed several days ago by three gay and lesbian couples in the U.S. District in Utah which challenges that state's ban on same-sex marriage. 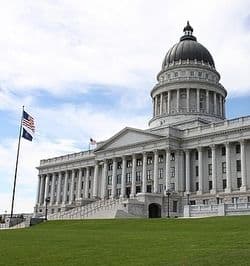 Plaintiffs in the Utah case include gay and lesbian couples who want to get married, along with a lesbian couple whose Iowa marriage isn't recognized by Utah…Swallow said marriage is for states to define.

"I believe that under our federal constitution the individual states retained the sole right to define the marriage relationship," Swallow said Tuesday in a statement. "As Attorney General, I swore an oath to defend the Utah Constitution and will do so by defending against this lawsuit with every resource at my disposal."

Later that day, about 100 people attended a rally in Provo, Utah in support of marriage equality.

The constitutional amendment on same-sex marriage in Utah was passed by voters in 2004. But last year saw some new data that indicated small but noteworthy progress in attitudes in that state toward marriage equality.