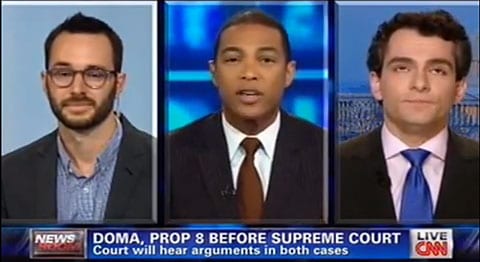 “Just to clarify, the issue here is not legality,” Anderson began, “so, in all 50 states, there is nothing illegal about same-sex marriage.”

“Hang on,” Lemon interjected. “You said same-sex marriage is not – is not illegal?”

“When something is illegal, it’s criminal to engage in that activity,” Anderson clarified.

The two engaged in crosstalk before Lemon insisted that, as the anchor of his program, he can interrupt any guest as often as he likes. “It is illegal – gay people don’t have the same rights,” Lemon insisted.

“It’s not illegal,” Anderson countered. “When something is illegal you can go to jail for doing it.”

The crosstalk was reignited when Anderson accused Lemon of using “the wrong terminology” to describe what is at issue before the Supreme Court regarding same-sex marriage.

“You can’t go to jail for committing a same-sex marriage,” Anderson added.

“Finish your point, as absurd as it is,” said Lemon, throwing up his hands.

Watch the exchange, AFTER THE JUMP…