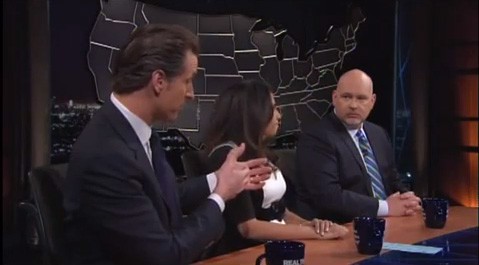 Former McCain aide Steve Schmidt told a apanel on Bill Maher which included California Lt. Governor Gavin Newsom that the GOP lags in its tech and internet capability because it can't attract young, cutting edge workers. Why? They don't want to work for a bigoted party.

"If you look at your first guest on talking about brilliant young people in computers who understand all this stuff [and] be at the cutting edge, it's difficult to make the case to work for a political party that wants to discriminate against their friend who happens to be gay. So we have an enormous problem because of some of our issues in the Republican party that are so out of step whether its with regard to women, gays, the anti-immigrant rhetoric, and it makes it difficult to attract the best and the brightest in this space."

The panel then moved on to CPAC and its rejection of Chris Christie, and Schmidt got thanks from Newsom for signing on to the GOP SCOTUS amicus brief.