In 2010, Bolivian President Evo Morales caused laughter to ripple through the audience at a conference on climate change when he suggested that eating hormone-injected chicken caused men to deviate into homosexuality. 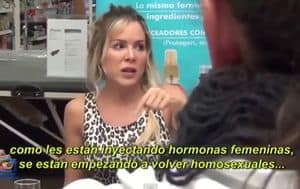 Now, a popular Colombian fashion model, Natalia Paris, is making headlines for the same nonsense, according to Colombia Reports:

Paris, a well known figure in Colombia, drew her conclusions from reports claiming that chickens were being injected with female hormones designed to speed up growth, “which means that these seven, eight, nine and 10 year old children [who are eating chicken] are having their feminine hormones accelerated…and are starting to become homosexual,” said Paris.

"When you hear this kind of a statement from a public figure like Natalia Paris, we must express our total outrage," said Fernando. He further added that there were no chickens in Colombia or anywhere in the world that are injected with hormones to accelerate growth, dismissing Paris' claims as "urban myths."