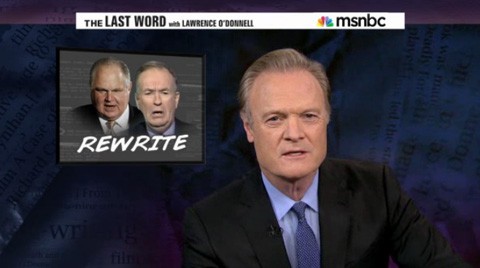 Rush Limbaugh took great offense to Bill O'Reilly's characterization this week of anti-gay marriage people as "Bible thumpers" and his evolution on marriage equality, so much so that he mentioned O'Reilly's name for the first time in ages.

Lawrence O'Donnell is eating it up.

Previous Post: « Kentucky Legislature Overrides Veto of Bill Protecting Right to Discriminate Against Gays Based on Religious Beliefs
Next Post: As Underwear Companies Jockey for His Junk, Jon Hamm Tells Public to ‘Lay Off…They’re Called Privates for a Reason’ »