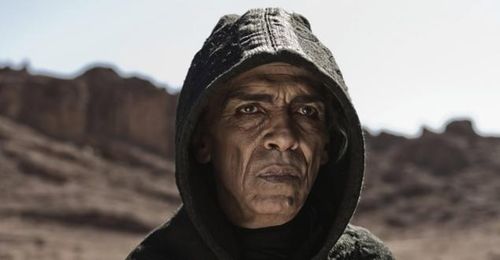 While the Obama-esque image of Satan from Mark Burnett's History Channel mini-series The Bible is making headlines this morning, it's worth noting that the religious consultants on the project, at least the ones named in a TV Guide article on it, are a "Who's Who" of notorious evangelical homophobes:

Burnett and Downey approached History and struck a deal, which included a sizable CGI budget to bring state-of-the-art realism to the Great Flood, the parting of the Red Sea, God's destruction of Sodom and Gomorrah and other Bible ­stories. The duo then formed an ­advisory board with some of America's top spiritual leaders.

"We weren't qualified to teach the Bible, but we knew plenty of people who were," says Burnett, whose interfaith panel included pastors Joel Osteen, Rick Warren and T.D. Jakes, Bishop Michael Sheridan, Focus on the Family president Jim Daly and Rev. Samuel Rodriguez.

These advisers were also supposed to appear on screen, since the original plan was to make The Bible a docudrama — reenactments peppered with lots of talking heads. But things went so well during the nearly six-month shoot in Morocco that the miniseries took a different course.

That's Osteen, who said "I don't believe homosexuality is God's best for a person's life" and called it "sin" many times, Prop 8 supporter Rick Warren who compared homosexuality to poison and compared acting on gay urges to assaulting someone, TD Jakes who has called homosexuality a "brokenness" despite his son getting arrested in a sex sting, Bishop Michael Sheridan who has called homosexuality "intrinsically evil" and told Catholics who vote for gay marriage that they can't receive communion, and Samuel Rodriguez, who teamed up with NY state senator Ruben Diaz to rally opponents of same-sex marriage, and Jim Daly, the head of virulently anti-gay Focus on the Family.

A reader to Towleroad writes:

It's worth noting that not only does every member of that panel have a distinctly anti-gay history, but that the panel is entirely conservative. Mark Burnett has made quite a bit of cash on the backs of gay contestants on his various shows, so I'm curious why any progressive or GLBT voices are suddenly lacking when he's looking for perspective this time around? It's 2013, and I thought the media was improving at least a little bit in thinking that the only religion that exists anywhere is right-wing religion, but apparently not in this case. And why–particularly- did Burnett seek out Focus on the Family for this, when FOF is not a church, last time I checked, but a thinly-veiled anti-gay organization?