The quest for the crucial subatomic partical known as the Higgs Boson has been successful, researchers said: 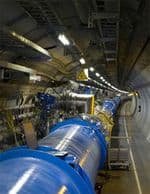 They made the statement following study of the data gathered last year from the world's largest atom-smasher, which lies beneath the Swiss-French border outside Geneva. The European Organization for Nuclear Research, or CERN, said that what they found last year was, indeed, a version of what is popularly referred to as the "God particle."

Joe Incandela, who heads one of the two main teams at CERN that each involve several thousand scientists, said in a statement that "it is clear that we are dealing with a Higgs boson though we still have a long way to go to know what kind of Higgs boson it is."

Previous Post: « Here’s the Guy Who Shot the Romney ’47 Percent’ Clip: VIDEO
Next Post: New Pope Francis a Veteran at Dealing with Anger Over the Church’s Anti-Gay Stance: His Quotes in Context »