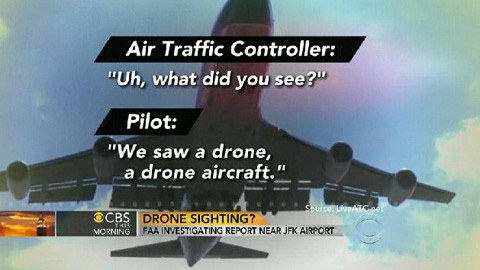 What's hovering in the skies over NYC?

The Alitalia pilot spotted the unmanned craft — described as “a black drone” — hovering just 200 feet from his jet about three miles east of the airport as he made his approach from Brooklyn.

“He was very clear as to what he saw,” a source said.

The pilot told investigators the object was flying at about 1,800 feet and looked like “a black drone about a meter square, with helicopter rotors on the corners.”

“It didn’t require the pilot of the jet to take any evasive action, and it didn’t interfere with the aircraft,” a source said.

Watch the CBS This Morning report, AFTER THE JUMP…

Previous Post: « PFLAG China Calls for Marriage Equality
Next Post: Meet the Maggie Gallagher of Teen Rappers and Listen to Her Song About the Evil Gay People: VIDEO »