Queen Elizabeth II will sign an historic pledge against discrimination that does not explicitly mention gay people but is being seen as a powerful gesture on gay and women's rights, the Daily Mail reports: 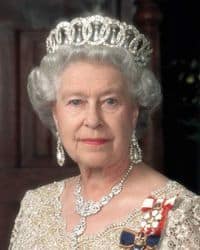 In a live television broadcast, she will sign a new charter designed to stamp out discrimination against homosexual people and promote the ‘empowerment’ of women – a key part of a new drive to boost human rights and living standards across the Commonwealth.

In her first public appearance since she had hospital treatment for a stomach bug, the Queen will sign the new Commonwealth Charter and make a speech explaining her passionate commitment to it.

Insiders say her decision to highlight the event is a ‘watershed’ moment – the first time she has clearly signalled her support for gay rights in her 61-year reign.

The charter, dubbed a ‘21st Century Commonwealth Magna Carta’ declares: ‘We are implacably opposed to all forms of discrimination, whether rooted in gender, race, colour, creed, political belief or other grounds.’

The ‘other grounds’ is intended to refer to sexuality – but specific reference to ‘gays and lesbians’ was omitted in deference to Commonwealth countries with draconian anti-gay laws.

The Queen is expected to say that the rights must "include everyone", according to the paper.

With the Duchess of Cambridge about five months’ pregnant, the change in the law could have a crucial effect. At present, if, as is rumoured, the Duchess and Prince William have a daughter, but go on to have a son, the son would become King when William dies. However, under the law change, due to be approved in the next few months, the girl would become Monarch.