Jacob Combs of Equality on Trial writes from the press room inside the Supreme Court this morning. He says it's not as busy as yesterday, less frenetic. 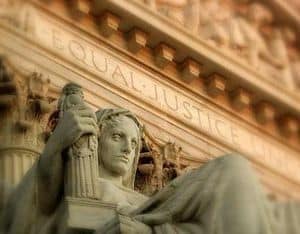 He  prepares us for what to expect:

Today’s hearing will be twice as long as yesterday’s, with the first fifty minutes devoted to questions of jurisdiction (whether the Bipartisan Legal Advisory Group of the U.S. House of Representatives has standing to defend DOMA and whether the Supreme Court has jurisdiction to hear the Windsor case when Edie Windsor and the federal government both agree that DOMA is unconstitutional).  The second half of the arguments will consist of an hour of discussion of the case on the merits.

Yesterday’s hearing was very wonky and procedurally oriented: the Justices spent a significant amount of time talking about issues of standing, and even once we got to the merits, we stayed in the weeds of legalese.  What surprised me yesterday was that there was very little discussion of what level of scrutiny should be applied to laws that affect gays and lesbians: whether they should be viewed under the more deferential rational basis standard or the more searching heightened scrutiny standards.  Part of this issue has to do with whether or not gays and lesbians are a ‘suspect class’: one based upon an immutable characteristic that has suffered discrimination and the whims of majoritarian opinion.

Check out more from Jacob at Equality on Trial...

And if you missed our legal editor Ari Ezra Waldman's preview pieces on what to expect at the DOMA arguments, you can catch up with these: