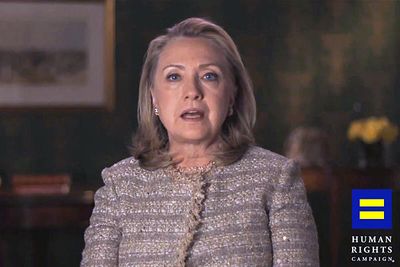 A busy day on the marriage equality front. After last week's pro-gay marriage announcement from Rob Portman, today it was former Secretary of State (and potential 2016 presidential candidate?) Hillary Clinton's turn. This as a new poll shows that public support for gay marriage is higher than ever.

Here is a pair of related videos that are likely to bring a tear to your eye. Watch 12-year-old Daniel read a powerful letter he wrote Chief Justice John Roberts about his two dads and the upcoming DOMA and Prop 8 cases. Very sweet. And celebrate marriage equality with an accordion-based tribute jam. 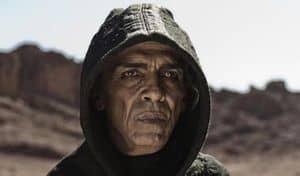 In case you haven't heard, Survivor creator Mark Burnett has a History Channel mini-series called The Bible. It turns out that in addition to creating a Satan who looks oddly like Obama, Burnett also hired a panel of prominent homophobes to advise him on Biblical accuracy. I think I'll pass on this one.

Alt-folk singer Michelle Shocked lived up to her name and cleared out a San Francisco venue with a homophobic rant. Here is a tip, if you want to wave to some pals, don't do it with a Nazi salute. Despite Rob Portman's GOP support for gay marriage, Rick Santorum is still not a fan of it. Shocker. And it seems the RNC would like to make themselves less offensive to some Americans.

Openly gay singer-songwriter Matt Fishel gives us a new song that skewers the homophobia in the music industry. A man in England did what I'm sure many of us have thought about and asked Prince Harry out on a date and the redhead replied in a surprisingly charming and adult manner. Also Anderson Cooper and Madonna get candid backstage after the GLAAD Awards.

One more video for today. It's a powerful coming out story from a Naval Petty Officer.