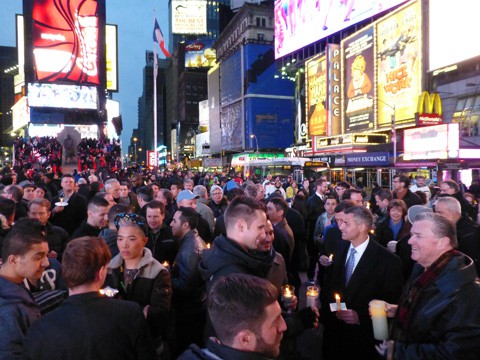 PHOTO OF THE DAY: New Yorkers light the way for gay rights.

There is only one day left until the Supreme Court hears arguments in the Prop 8 and DOMA cases and ahead of that monumental day here is a whole bunch of links, quotes, previews and anything else you might need relating to the marriage equality trial. On that note, our legal expert Ari Ezra Waldman continues his preview of the hearings with a discussion of whether DOMA and Prop 8 are unconstitutional under the definition of equal protection. Ari also gives us a look at what we might be able to expect on Tuesday and Wednesday.

Chief Supreme Court Justice John Roberts will have family scrutinizing him from inside the courtroom this week as his lesbian cousin will be attending the hearings. And Edie Windsor, the plaintiff in the DOMA case at the Supreme Court, will be one of the Grand Marshals at this summer's LGBT Pride March in New York City.

The DOMA and Prop 8 cases won't be the only gay-related cases in court this week. Lt. Dan Choi, who was arrested after a peaceful protest against "Don't Ask Don't Tell", will be returning to a federal court. A CBS Sports report indicates that we may be closing in on our first openly gay active player in a major sports league as there are rumors that an NFL player is weighing coming out. 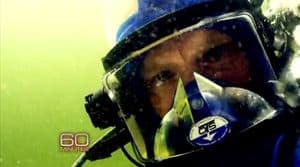 The California Department of Education has added some LGBT-inclusive reading to their "Recommended Literature List" and one right-wing nutjob is likening it to child rape? And if you are a sodomite who is looking for Ann Coulter to foot the bill for your trip to a bathhouse then you are out of luck.

We all know how cuddly crocodiles in the Nile are, so Anderson Cooper got in the river to play with them. Also check out some clips from Daft Punk's forthcoming new album.

According to the most recent Census reports there are no gays in Franklin County, Mississippi; so CNN went to find out if that was really true.

Life is so much better now that I know that "fizzle" originally meant to fart quietly. And this video will make you grossed out by your own skin.