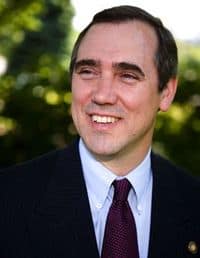 Pointing to the dramatically-changed political climate on marriage equality and LGBT issues, Democratic Sen. Jeff Merkley (Ore.) said yesterday that he’s been having talks with key Republicans in the Senate about supporting the Employment Non-Discrimination Act (ENDA), which would ban discrimination based on sexual orientation and gender identity and which he reintroduced in the Senate on Thursday.

Said Merkley about his talks with those GOP senators:

"I can tell you I’ve sat down with a number of Republicans who have not come out publicly yet. They’re still mulling over what they’re going to do, but I think there’s a very good chance they’re going to be supporting this bill. Whether that comes in a co-sponsorship or an affirmative vote when we are on the floor is yet to be seen. But I think that our numbers will be increasing both in sponsorship and in a floor vote than where we would have been had we had a floor vote even two years ago or four years ago."